The southern pig-tailed macaque (Macaca nemestrina), also known as the Sundaland pig-tailed macaque and Sunda pig-tailed macaque, is a medium-sized macaque that lives in southern Thailand, Malaysia, and Indonesia. It is known locally as the beruk. M. nemestrina can reach a weight of up to 15 kg (33 lb) for large males. This macaque has buff-brown fur, with a darker dorsal area and lighter ventral area. Its common name refers to the short tail held semi-erect, resembling the tail of a pig. This macaque is mostly found in rainforest up to 2000 meters, but will also enter plantations and gardens. It is found in the southern half of the Malay Peninsula (only just extending into southernmost Thailand), Borneo, Sumatra, and Bangka Island. There are reports of the species having been present in Singapore before 1950, but these were likely escaped pets. The only pig-tailed macaques in Singapore today are introduced monkeys. 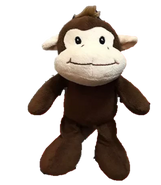