The Parody Wiki
Register
Don't have an account?
Sign In
in: Characters, Animals, Ocean Animals,
and 74 more

The southern stingray (Dasyatis americana) is adapted for life on the sea bed. The flattened, diamond-shaped body has sharp corners, making it more angular than the discs of other rays. The top of the body varies between olive brown and green in adults, dark grey in juveniles, whilst the underside is predominantly white. The wing-ike pectoral fins are used to propel the stingray across the ocean bottom, whilst the slender tail possesses a long, serrated and poisonous spine at the base, used for defence. These spines are not fatal to humans, but are incredibly painful if stepped on. The eyes are situated on top of the head of the southern stingray, along with small openings called spiracles. The location of the spiracles enables the stingray to take in water whilst lying on the seabed, or when partially buried in sediment. Water enters the spiracles and leaves through the gill openings, bypassing the mouth which is on the underside 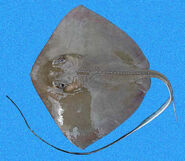 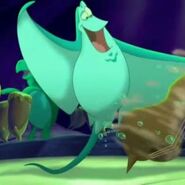 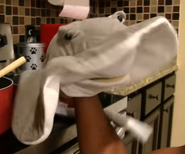 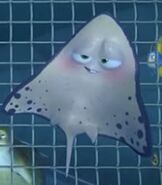 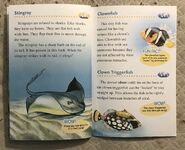