The Parody Wiki
Register
Don't have an account?
Sign In
Advertisement
in: Countries, Europe, The Road to El Dorado Locations,
and 2 more

Spain (Spanish: España), officially the Kingdom of Spain (Spanish: Reino de España), is a country mostly located on the Iberian Peninsula in Europe. The country's mainland is bordered to the south and east by the Mediterranean Sea except for a small land boundary with Gibraltar; to the north and northeast by France, Andorra, and the Bay of Biscay; and to the west and northwest by Portugal and the Atlantic Ocean. Spanish territory includes two large archipelagoes, the Balearic Islands in the Mediterranean Sea and the Canary Islands off the African Atlantic coast, two cities, Ceuta and Melilla, on the African mainland and several small islands in the Alboran Sea near the African coast. Spain is the only European country to have a border with an African country (Morocco). With an area of 505,990 km² (195,360 sq mi), Spain is the largest country in Southern Europe, the second largest country in Western Europe and the European Union, and the fourth largest country in the European continent. By population, Spain is the sixth largest in Europe and the fifth in the European Union. Spain's capital and largest city is Madrid; other major urban areas include Barcelona, Valencia, Seville, Málaga and Bilbao. 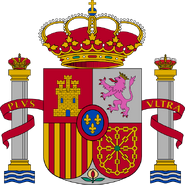