The Parody Wiki
Register
Don't have an account?
Sign In
Advertisement
in: Characters, Animals, South American Animals,
and 73 more

The spectacled bear (Tremarctos ornatus), also known as the Andean bear, Andean short-faced bear, or mountain bear and locally as jukumari (Aymara and Quechua), ukumari (Quechua) or ukuku, is the last remaining short-faced bear (subfamily Tremarctinae). Its closest relatives are the extinct Florida spectacled bear, and the giant short-faced bears of the Middle to Late Pleistocene age (Arctodus and Arctotherium). Spectacled bears are the only surviving species of bear native to South America, and the only surviving member of the subfamily Tremarctinae. The species is classified as Vulnerable by the IUCN because of habitat loss. The spectacled bear is the only bear native to South America and is the largest land carnivore on that part of the continent, although as little as 5% of its diet is composed of meat. South America's largest obligate carnivorous mammal is the jaguar (Panthera onca). Among South America's extant, native land animals, only the Baird's tapir (Tapirus bairdii), South American tapir (T. terrestris) and mountain tapir (T. pinchaque) are heavier than this species. The spectacled bear is a mid-sized species of bear. Overall, its fur is blackish in color, though bears may vary from jet black to dark brown and to even a reddish hue. The species typically has distinctive beige or ginger-colored markings across its face and upper chest, though not all spectacled bears have "spectacle" markings. The pattern and extent of pale markings are slightly different on each individual bear, and bears can be readily distinguished by this. Males are a third larger than females in dimensions and sometimes twice their weight. Compared to other living bears, this species has a more rounded face with a relatively short and broad snout. In some extinct species of the Tremarctinae subfamily, this facial structure has been thought to be an adaptation to a largely carnivorous diet, despite the modern spectacled bears' herbivorous dietary preferences. The spectacled bear's sense of smell is extremely sensitive. They can perceive from the ground when a tree is loaded with ripe fruit. On the other hand, their hearing is moderate and their vision is short. Before spectacled bear populations became fragmented during the last 500 years, the species had a reputation for being adaptable, as it is found in a wide variety of habitats and altitudes throughout its range, including cloud forests, high-altitude grasslands, dry forests and scrub deserts. A single spectacled bear population on the border of Peru and Ecuador inhabited as great a range of habitat types as the world's brown bears (Ursus arctos) now occupy. The best habitats for spectacled bears are humid to very humid montane forests. These cloud forests typically occupy a 500 to 1,000 m (1,600 to 3,300 ft) elevational band between 1,000 and 2,700 m (3,300 and 8,900 ft) depending on latitude. Generally, the wetter these forests are the more food species there are that can support bears. Occasionally, they may reach altitudes as low as 250 m (820 ft), but are not typically found below 1,900 m (6,200 ft) in the foothills. They can even range up to the mountain snow line at over 5,000 m (16,000 ft) in elevation. Therefore, it is well known that bears use all these types of habitats in regional movements; however, the seasonal patterns of these movements are still unknown. Nowadays, the distribution area of the Tremarctos ornatus is influenced by the human presence, mainly due to habitat destruction and degradation, hunting and fragmentation of populations. This fragmentation is mainly found in Venezuela, Colombia, and Ecuador and it represents several problems to this population because, first, their persistence is compromised if they are small, isolated populations, even without facing habitat lost or hunting. Second, the transformation of the landscape represents loss of availability of the type of habitats spectacled bears need. Third, fragmentation exposes bears to hunting and killing due to its accessibility. 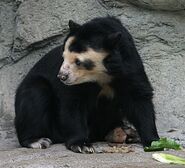 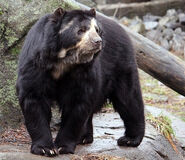 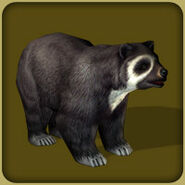 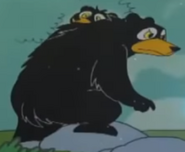 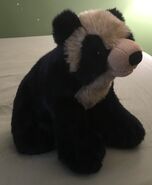 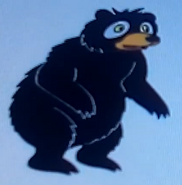 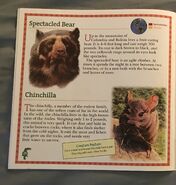