In the DVD movies, he wears a pair of blue workshop trousers with a rope belt and is not as spiteful to others anymore, but feels out of his depth, until his friends give him encouragement. In the second Leapfrog e-book High Flying Act he works as a prize giver for a spinning wheel booth. 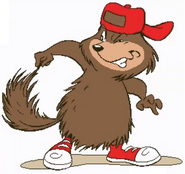 Retrieved from "https://parody.fandom.com/wiki/Spike_Porcupine?oldid=2096747"
Community content is available under CC-BY-SA unless otherwise noted.