The Parody Wiki
Register
Don't have an account?
Sign In
Advertisement
in: Characters, Animals, Ocean Animals,
and 25 more

The acrobatic spinner dolphin (Stenella longirostris) is the most common small cetacean in many tropical open seas, where it can be seen spinning high in the air (hence its common name) or riding the bow waves of boats. The small and slender spinner dolphin varies geographically in colouration and size, but can be identified by its relatively long, slender beak and triangular dorsal fin. The most common colour pattern is three-part: dark grey on the back, lighter grey along the sides, and white or very light grey underneath. A darker grey stripe runs from the eye to the flipper, bordered above by a narrow, light line. 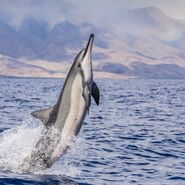 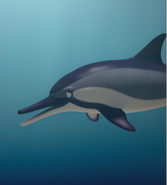