The Parody Wiki
Register
Don't have an account?
Sign In
Advertisement
in: Male Characters, Characters, Protagonists,
and 29 more

Spot is a yellow dog puppy with a brown spot on each side of his body and a brown tip on his tail and the main protagonist in the late Eric Hill's book series of the same name (possibly with the first, "Where's Spot?" as the exception, as that role went to his mother Sally instead, as she spends it all looking for him), and the TV series. In the original American animated series, he, like all characters, is voiced by Jonathan Taylor Thomas (in both seasons, and returning to the second season of "It's Fun to Learn with Spot") and (in the first season of "It's Fun to Learn with Spot"). (as heard in "Spot's Magical Christmas" and "Spot and His Grandparents") and finally, neither of whom was the narrator (instead, that was narrated by Corey Burton, who had voiced most other male characters, like his father Sam). 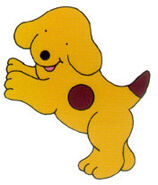 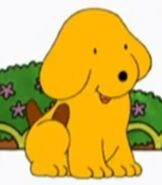