The Parody Wiki
Register
Don't have an account?
Sign In
Advertisement
in: Characters, Animals, African Animals,
and 13 more

Despite being one of the smaller eagle-owl species, the spotted eagle owl (Bubo africanus), nevertheless, possesses an impressive one metre wingspan. The plumage is mainly brownish-grey and heavily marked with large white spots and blotches, with the exception of the breast and underparts, which are whitish with fine grey-brown barring. The eyes are large and bright yellow and two distinctive, elongated ear tufts extend upwards from the head. In arid areas, spotted eagle-owl individuals may be encountered with chestnut-brown plumage and orange eyes, while in south-west Arabia a smaller, tawnier subspecies, Bubo africanus milesi, occurs. The spotted eagle-owl’s call is a typical hoot, hoo-hoo. 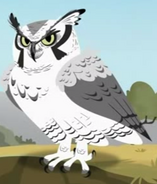 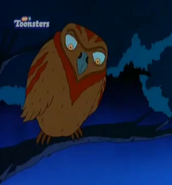 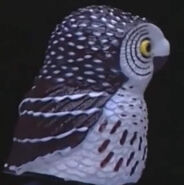