The Parody Wiki
Register
Don't have an account?
Sign In
Advertisement
in: Animals, Mammals, Pinnipeds,
and 14 more

The spotted seal (Phoca largha) also known as the larga seal or largha seal, is a member of the family Phocidae, and is considered a "true seal". It inhabits ice floes and waters of the north Pacific Ocean and adjacent seas. It is primarily found along the continental shelf of the Beaufort, Chukchi, Bering and Okhotsk Seas, and south to the northern Yellow Sea, and it migrates south as far as northern Huanghai, and the western Sea of Japan. It is also found in Alaska from the southeastern Bristol Bay to Demarcation Point during the ice-free seasons of summer and autumn when spotted seals mate and have pups. Smaller numbers are found in the Beaufort Sea. It is sometimes mistaken for the harbor seal to which it is closely related and spotted seals and harbor seals often mingle together in areas where their habitats overlap. The reduction in arctic ice floes due to global warming led to concerns that the spotted seal was threatened with extinction. Studies were conducted on its population numbers, with the conclusion, as of October 15, 2009, that the spotted seal population in Alaskan waters is not currently to be listed as endangered by NOAA. 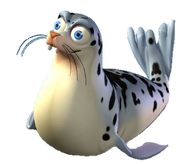