The Parody Wiki
Register
Don't have an account?
Sign In
Advertisement
in: Female Characters, Females, Stinky Characters,
and 3 more

The Squid Sisters, known in Japan as Sea O' Colors (シオカラーズ Shiokarāzu), are an idol Inkling pop duo based in Inkopolis, consisting of cousins Callie and Marie (アオリ & ホタル Aori and Hotaru). They were the former hosts for the Inkopolis News program, which announces events, new DLC and other battle-related news. They used to host and manage Splatfests. Their voice actors are Keity.pop and Mari Kikuma (菊間まり), respectively. In the Super Smash Bros series, they appear as an assist trophy. They will cause the screen to zoom towards them while singing either Ink Me Up or Calamari Inkantation. Not only that, but the Squid Sisters are a legendary support spirit in said game, which causes the player's Final Smash Meter charges more quickly.

In Hero Mode, it is revealed that the two of them are Cap'n Cuttlefish's granddaughters. They are also Agents One and Two of the new Squidbeak Splatoon. Despite their title being "Squid Sisters", they are actually cousins. 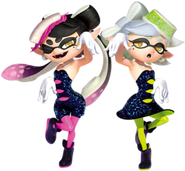 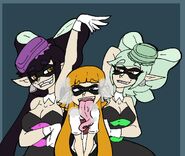 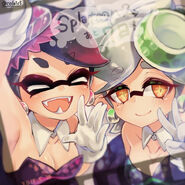