The Parody Wiki
Register
Don't have an account?
Sign In
Advertisement
in: Characters, Animals, North American Animals,
and 46 more

Stag beetle, (family Lucanidae), also called pinching bug, any of some 900 species of beetles (insect order Coleoptera) in which the mandibles (jaws) are greatly developed in the male and resemble the antlers of a stag. In many species the elaborately branched and toothed mandibles may be as long as the beetle itself. If handled carelessly, their pinch can draw blood from a person. In some cases, however, the mandibles are large enough to be a handicap to the beetle’s movement. 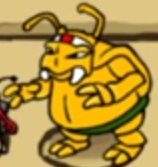