Start a Wiki
Stan is a central bearded dragon and was the leader of a clan of bandits. He is the antagonist before he reformed. He appears in Riley's Adventures. 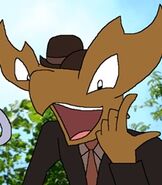 Add a photo to this gallery
Retrieved from "https://parody.fandom.com/wiki/Stan_(Riley%27s_Adventures)?oldid=2167902"
Community content is available under CC-BY-SA unless otherwise noted.