Stan (referred to as Stanley) is one of the main protagonists in the show. He has yellow fur, a long snout, brown nose, and has a puff of hair on the top of his head.

Stan has a very sarcastic attitude towards Pat. He is capable of fixing Professor Chi-Chi's inventions whenever they go wrong. Stan has an aunt named Aunt Martha, who often visits the boys' house.

Unlike Pat, Stan does more around the house than Pat. He sometimes disagree with him and goes his own way. He likes to play tricks and sometimes scare Pat. In the episode "Wild Camping", Stan tells Pat that there were Zombies and Vampires out to get them. He soon apologises and the boys go home.

Stan is voiced by David Wills. 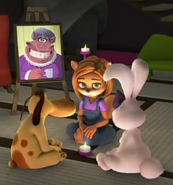 Retrieved from "https://parody.fandom.com/wiki/Stan_the_Dog?oldid=2096972"
Community content is available under CC-BY-SA unless otherwise noted.