Christine Cavanaugh (as a kid)

Scott Weinger (as an adult)
??? (The Smilodon Guard)

King of the Cenozoic Lands

To protect and rule the ??? Lands (succeeded)

Defeats his uncle Silas and assumes his rightful role as King of the Cenozoic Lands.

"Danger? Ha, I walk on the wild side. I laugh in the face of danger!"

Stanley is the protagonist of 20th Century Fox's 1991 animated feature film The Smilodon King. He is the son of Michael, who was destined to rule the Cenozoic Lands, as king. When Michael is killed in a Shrub ox stampede, Stanley is blamed for the tragedy and abandons his kingdom in guilt. He finds refuge in a jungle oasis with a squirrel and wild boar, but the Cenozoic Lands fall to disarray during his absence. With the kingdom in peril, Stanley is forced to confront his troubled past to take his place in the "Circle of Life".

At the break of dawn, the royal couple Mufasa and Sarabi welcome the arrival of their newborn cub, Simba, and, at his birth, is presented to the kingdom as their future king. Rafiki, a wise mandrill who was an old friend of Mufasa, heads the ceremony, performing a ritual before presenting Simba.

Months later, Simba grows up into a clever and kind playful cub, with a rambunctious attitude. He grows excited about being king someday after Mufasa shows him the kingdom. Mufasa explains that Simba will one day rule over everything they can see, but warns Simba not to go to a shadowy area beyond the borders of the Pride Lands. Though Simba initially believes that being king is about getting to do whatever he wishes, Mufasa teaches him about the responsibilities of being royalty. Suddenly, Mufasa is alerted by Zazu of hyenas in the Pride Lands. Mufasa goes to deal with the situation and tells Zazu to take Simba home, much to the cub's disappointment.

After Simba returns home, he tells his uncle Scar about the trip. Taking advantage of the cub's naive nature, Scar tells Simba what the forbidden place is (tricking him into going there). It is in fact, the elephant's graveyard, where only the bravest lions travel. Simba wants to prove himself brave, and Scar makes this their "little secret." As of that moment, Simba's journey to kingship had begun.

Later that afternoon, Simba meets his best friend Nala, and they travel to the graveyard. Unknown to them, Scar had placed his hyena henchmen there to kill the cubs, in an attempt to remove Simba from the line of succession so that Scar could become king and make every animal from Pride Rock obey him. Having been found by Zazu after the hyenas had their fun shooting him out of a geyser, Mufasa saves the two cubs, foiling Scar's plan, but is disappointed in Simba for disobeying him. After sending Nala and Zazu back to Pride Rock, Mufasa lectures Simba on the line between bravery and bravado, and he forgives and forgets. Afterward, Simba asks if they will always be together. Mufasa responds by telling Simba about the Great Kings of the Past, who look down from the stars. Mufasa tells Simba if he ever feels alone, the Great Kings will always be there to guide him, and so will he. 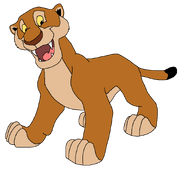