Stanley the Mouse is a guest who hails from the Arctic to the Tropics to everywhere inbetween, and appears in the seventh season 3 episode of The Animal Show. He speaks with a cute British voice. He tells Stinky and Jake everything there is to know about mice and how they are a prey species. He even tells Stinky and Jake about shrews and voles.

Without knowing this, Stinky invites other animals to honor the mouse, but as it turns out, the guests he invited are an owl, a rattlesnake, and a fox, all of whom want to eat Stanley causing Stinky and Jake to keep the three of them distracted from Stanley through whatever means possible. He even sings a song called "It's Tough Being a Mouse." At the end of the episode, Stanley is told by Stinky that he had talked to the three animals and that they won't harm him. However, they will allow Stanley to take a head start out of the studio before they come after him. 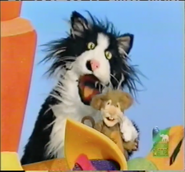 Add a photo to this gallery
Retrieved from "https://parody.fandom.com/wiki/Stanley_the_Mouse?oldid=2276985"
Community content is available under CC-BY-SA unless otherwise noted.