The Parody Wiki
Register
Don't have an account?
Sign In
Advertisement
in: Pages with broken file links, Lilo and Stitch Characters, Puppies,
and 19 more

Stitch, A.K.A. Experiment 626, is an illegal genetic experiment created by Jumba Jookiba, one of the titular protagonists of the Lilo & Stitch franchise alongside Lilo Pelekai, and the most prominent protagonist of the franchise overall, appearing in all major media. Originally created to cause chaos across the galaxy by destroying everything he touches, he is marked by his short temper and mischievous behavior, traits that endear him to his friend Lilo, who adopted him as her "puppy". He is designed to be abnormally strong, virtually indestructible, super-intelligent, and very mischievous. His one true place is with Lilo and her ʻohana.

Outside of Lilo and Stitch series, his current 'ohana, and his new friends are Grizz (from We Bare Bears) and his Pokémon partner, Grizz Jr. (a Teddiursa, from Pokémon).

He and Angel are both appeared in Just Dance Unlimited, for the song Head & Heart

He Played Oliver in Stitch & Company

He is a electric mouse

He Played SkyTrain Mark I #99

He Played SkyTrain Mark I #113

He Played SkyTrain Mark I #156

He Played Boo as an extra with Lilo in Ohanas Inc. 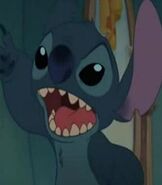