Stygimoloch is a genus of pachycephalosaurid dinosaur from the end of the Cretaceous period, roughly 66 million years ago. It is currently known from the Hell Creek Formation, Ferris Formation, and Lance Formation of the Western Interior (United States), where it lived alongside Tyrannosaurus and Triceratops. The type species, S. spinifer (meaning "thorny devil from the Styx (river of death)"), was described by British vertebrate paleontologist Peter Galton and German paleontologist Hans-Dieter Sues of the National Museum of Natural History in 1983. Stygimoloch is characterized by clusters of spikes on the back of the skull, in which a long central horn is surrounded by 2-3 smaller hornlets, and a tall, narrow dome. 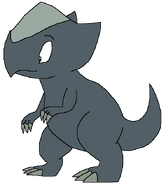 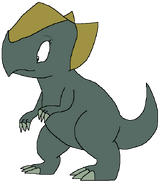 Retrieved from "https://parody.fandom.com/wiki/Stygimoloch?oldid=2624343"
Community content is available under CC-BY-SA unless otherwise noted.