The Parody Wiki
Register
Don't have an account?
Sign In
Advertisement
in: Characters, Animals, Extinct Animals,
and 21 more

Suchomimus had a very long, low snout and narrow jaws, formed by a forward expansion of the premaxilla and the anterior ramus of the maxilla. The jaws have about 122 conical teeth, pointed but not very sharp and curving slightly backward, with fine serrations. The tip of the snout was enlarged sideways and carried a "rosette" of longer teeth, seven per side in the skull and about the same number in the corresponding part of the lower jaw. Further back, there are at least twenty-two teeth per upper jaw side in the maxilla, while the entire lower jaw side carries thirty-two teeth in the dentary bone. The upper jaw shows a prominent kink just behind the rosette, protruding to below; this convexly curved part of the maxilla has the longest teeth of the entire skull. The skull is reminiscent of that of crocodilians that eat mainly fish. The internal bone shelves of the maxillae meet each other over a long distance, forming a closed front palate rigidifying the snout. The nostrils are long, narrow and horizontally positioned; the same is true of the larger antorbital fenestra. The rear of the skull is poorly known but a short quadrate, separated from the quadratojugal by a large foramen quadraticum, shows it must have been low. The lower jaws are very elongated and narrow, forming a rigid structure as their dentaries touch each other at the midline, reinforcing the mandible against torsional forces. 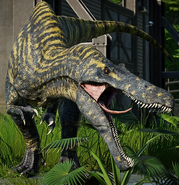