She is a hip, trendy, wrestling-loving grandmother who does Tae-Bo. She is very sassy, savage and always gets straight to the facts and point when she talks. She constantly insults, discourages and beats up Oscar

but she loves him deep down. Her age is unknown, though she was born before the Korean War, as revealed in "Teacher's Pet". She often made fun, and roasted of by her son. An event from twenty years ago shows her looking exactly the same as before, however, while slimming down to fit into a wedding dress her diet was so successful that she gained the slim and attractive body she had as a young woman.

Suga Mama, in general, is a very peppy, and sometimes crazy grandmother who still considers herself to be in her youthful prime; she can lack self-awareness when undergoing events that show her age (falling asleep in front of the TV in loud conditions, getting exhausted after walking up a large hill, flirting with other men,etc.) But she can be a very active grandmother despite her age.

She definitely loves her family and puts them ahead of everything else. Although she fights constantly with Oscar, she still loves him and has proven to have his best interests in mind. 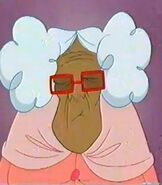 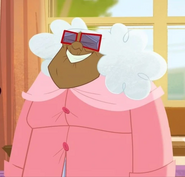