The Parody Wiki
Register
Don't have an account?
Sign In
Advertisement
in: Characters, Animals, Australian Animals,
and 43 more

The smallest and by far the most common of the Petaurus gliders, the sugar glider (Petaurus breviceps) is a small, softly-furred possum with a bushy, prehensile tail. Like other gliders, it possesses a thin, furred membrane, known as a ‘patagium’, which stretches from the wrist to the ankle and which can be seen as a wavy line along the body when not in use. The feet are hand-like, able to grasp branches, aided by an opposable toe on the hindfoot, and the second and third toes of the hindfoot are fused, with a split claw that is used in grooming. The body of the sugar glider is light grey, paler on the underparts, with a distinct black stripe running from the nose to the rump, and a black line on each side of the face. The tail sometimes has a white tip. The mature male sugar glider can be distinguished by an almost bare patch in the middle of the forehead, over the frontal gland. The sugar glider has a distinctive alarm call, said to resemble the yapping of a dog. Other calls include a high-pitched cry, and buzzing, screaming and hissing sounds. A number of subspecies are recognised, with those in the northern parts of the range generally being smaller than those in the south. 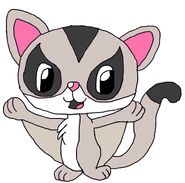 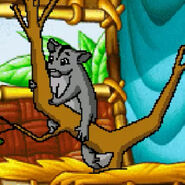 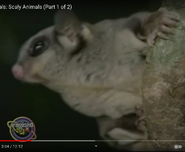