The Parody Wiki
Register
Don't have an account?
Sign In
in: Pages with broken file links, Characters, Females,
and 7 more

Sugar Sprinkles is a cat who lives inside the Sweet Truck. She is tan-colored with white arms and muzzle, and bright blue eyes. Around her neck, most of her tail, bangs, and outer-ear coloring are a dark shade of pink.

She wears a small blue bow on her head, attached to white hair that resembles dollops of cream. On her bangs and tail are multiple sprinkles.

Sugar appears to be very laid-back, cool tempered, and very calm. She is never worked up over anything and has a very apologetic demeanor, apologizing in advance for things and complimenting others, as well as letting them lick her, due to her sugary-sweet taste and all the pets love the sprinkles on her head.

Without her sprinkles, she turns angry and savage until the sprinkles are replaced. Upon them being replaced, she has no recollection of what happened.

When Buttercream took the pets to see the Sweet Truck, Sugar Sprinkles came out of the sprinkles store and introduced herself. She invited the pets to taste the sprinkles on her head while playing a song with her ukulele. She was the only one to remain calm when the truck went down the street, and claimed someday they would look back at that and laugh.

In Blythe's Big Idea, she is in the singing crowd of Pet Friendly Skies.

With advice from the Canine Cop, she helps her best friends in their plan to get the perfect parking spot for the truck in Super Sunil. She uses a headset and speaks trucker lingo.

In Secret Cupet, she takes the mysterious identity of Secret Cupid and uses her ukulele to play a love-inducing song. Her targets - which include Baa Baa Lou, Russell, Sunil, and Vinnie - fall in love with the first pets that they see - a female pig, Penny Ling, Pepper, and Minka, respectively - after listening to the song. After seeing what her victims are capable of, she decides to sing the song backwards to wear its effects off. Later, Russell takes the instrument away from her in aggravation. She then takes out a spare ukulele behind his back.

In Snipmates, she suddenly becomes uncharacteristically grumpy and aggressive. When the pets discover that this is because the sprinkles on her head are gone, they split up to distract the now deranged cat and get the sprinkles. When the sprinkles are put up top her head, she returns to her normal, laid-back self. She also has no recollection of what happened, meaning that the experience manipulated her memory.

In Steamed, she is inspired to write a song about the Pawrista Coffee Shop after seeing Fuzzy Gumbopaws. Her song causes Pepper to fall asleep happily, letting out a smell of coffee from her sleeping spot inside the shop's decorative cup outside.

Sugar Sprinkles has been released as part of the Sweet Delights Treat Truck playset. Her ID number is #3077.

A Magic Motion Kitty with the ID #3627 also bears a striking resemblance to her, though it is not marketed as Sugar Sprinkles.

On February 2014, a new toy of her was shown at Toy Fair 2014, as part of the Franchise Re-Invention. She comes bundled with the little kitten Ripley Davis in the Pet Pawsabilities assortment.[1] 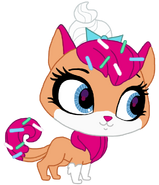 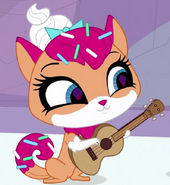