The Parody Wiki
Register
Don't have an account?
Sign In
Advertisement
in: Characters, Animals, Asian Animals,
and 60 more

This prehistoric-looking, armour-plated giant is one of the most endangered of the five rhinoceros species. Despite being the smallest of all the living rhinos, the Sumatran rhinoceros (Dicerorhinus sumatrensis), also known as the Asian two-horned rhinoceros, is still an immense animal, with leathery, dark grey-brown skin, measuring up to 16 millimetres thick. This thick skin has a covering of reddish-brown hair, which is long and dense on calves and young adults, but becomes sparser and blacker as the rhino ages. The other rhinoceros species do not have such copious hairs, and thus the Sumatran rhinoceros is often called the ‘hairy rhino’. A large fold of skin extends across the back, behind the shoulder, and thick, wrinkles of skin encircle the eye. The Sumatran rhinoceros is the only rhino in Asia which bears two horns; in fact, the genus name Dicerorhinus comes from the Latin word for two, horn (ceros) and nose (rhinos). However, the second horn can be so short, rarely measuring more than ten centimetres, that often it appears to be single-horned with just the first horn, measuring up to 30 centimetres, showing clearly. 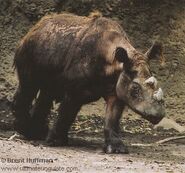 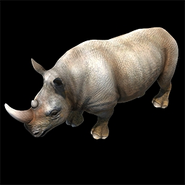 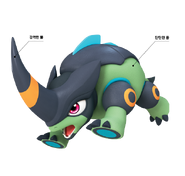