The Parody Wiki
Register
Don't have an account?
Sign In
Advertisement
in: Characters, Animals, Ocean Animals,
and 5 more

Pycnopodia helianthoides, commonly known as the sunflower sea star, is a large sea star found in the northeast Pacific. The only species of its genus it is among the largest sea stars in the world (but not quite the largest), with a maximum arm span of 1 m (3.3 ft). Sunflower sea stars usually have 16 to 24 limbs; their color can vary widely. They are predatory, feeding mostly on sea urchins, clams, snails, and other small invertebrates. Although the species had been widely distributed throughout the northeast Pacific, its population has rapidly declined since 2013. 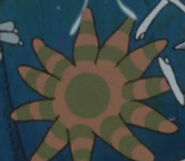