Susie is a character of the television show, Care Bears (DiC series). She appears in Rosemary Hills, making her debut in Extreme Skate Strategy.

When Professor Coldheart completes his latest invention, an airplane designed to spread concrete over a large area, he only needs one more component to make it work - an extra crew mate to shovel the concrete into the spreader itself. As luck would have it, a girl named Susie is frustrated over her inability to skate at her local park due to heavy foot traffic on its meager sidewalk, and happily takes the crafty professor up on his offer to create more areas for her to skate. It turns out, however, that he plans to cover the entire park in concrete, making it cold, grey, and miserable.

Not realizing his plan until it is too late, she assists him in spreading the concrete over most of the area, and has to be convinced by Cheer Bear that what she's doing is bad for everyone. After bailing out of his plane, a group of Care Cousins are able to turn the effected parts of the park back to normal with a Care Bear Stare. Susie celebrates her new found appreciation for greenery with a picnic. 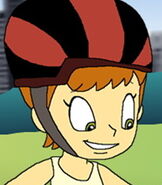