The Parody Wiki
Register
Don't have an account?
Sign In
Advertisement
in: Recess characters, Protagonists, Friends,
and 21 more

Theodore Jasper "T.J." Detweiler is the leader of the group and is the main protagonist of the animated TV series Recess.

T.J. is the leader of the main six kids in the show and has been best friends with them since kindergarten (except Gus, who moved to town in the first episode, however, he has also been shown in kindergarten with the rest of the kids). He is outgoing, kindhearted, optimistic, and friendly, and takes having fun very seriously. He is also very dumb, and once he even scored a 10% on a test. While he is somewhat ditzy, ignorant, and lazy, he's a genius when it comes to pulling schemes on the playground.

Despite being more heavy-set than the other five members of the gang (save for Mikey), he is capable of pulling a few stunts, such as escaping detention by climbing either out the window or from the roof of the school a few times. In second grade, he invented the word "whomp", which is what the kids of the playground use instead of "stinks" or "sucks" to describe an unpleasant situation or person. Aside from "whomp", he also uses the word "frooping" a number of times (to replace the "f-word"), though it is unknown whether he created the word or not. T.J. often roots for the underdog and cares about every kid on the playground, including his enemies. Thus causing most of the school to like him, with the exception of Gordy, as seen in the episode, "Nobody Doesn't Like T.J.". He is hardly ever seen without his red baseball hat.

His best friend, Ashley Spinelli, has a crush on him, as revealed in the episode "Parents' Night". In the episode "The Experiment", they kiss each other to experiment on the effects kissing has on the opposite genders, with them seeming to not enjoy it. However, when they are left by themselves afterward, they both seem to act a little shy about it, hinting that T.J. has a crush on her as well. He is often seen wrapping his arm around her shoulders for no apparent reason, which also hints this.

He was very shy as a kindergarten student and was not the brave leader that has been seen in the fourth grade. Gus was the first one to really become his friend, and he was also the one who gave him his nickname. After Gus proves to the other students that Mikey wasn't a bully, the other kindergartners start to become more outgoing and show the first displays of their usual personalities, When Randall tattles on Gus and is put in the principal's office, T.J. assumes his position as the leader when they have to save Gus, and puts his trademark baseball cap on backward as he wears it in the series proper.

He is space ranger 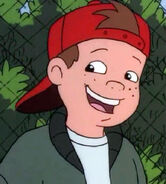 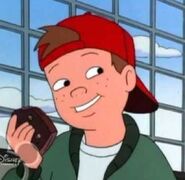