The Parody Wiki
Register
Don't have an account?
Sign In
Advertisement
in: Countries, Africa, The Lion King Locations,
and 11 more

Tanzania, officially the United Republic of Tanzania (Swahili: Jamhuri ya Muungano wa Tanzania), is a country in eastern Africa within the African Great Lakes region. It borders Kenya and Uganda to the north; Rwanda, Burundi, and the Democratic Republic of the Congo to the west; Zambia, Malawi, and Mozambique to the south; and the Indian Ocean to the east. Mount Kilimanjaro, Africa's highest mountain, is in north-eastern Tanzania. The official capital of Tanzania is Dodoma, while its former capital, Dar es Salaam, possesses most government offices and is the country's largest city, principal port, and leading commercial centre. It is also mountainous and densely forested in the north-east, where Mount Kilimanjaro is located. Three of Africa's Great Lakes are partly within Tanzania. To the north and west lie Lake Victoria, Africa's largest lake, and Lake Tanganyika, the continent's deepest lake, known for its unique species of fish. The eastern shore is hot and humid, with the Zanzibar Archipelago just offshore. The Kalambo Falls, located on the Kalambo River at the Zambian border, is the second highest uninterrupted waterfall in Africa. The Menai Bay Conservation Area is Zanzibar's largest marine protected area. 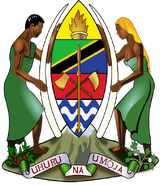 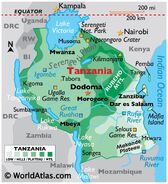 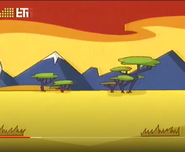