The Parody Wiki
Register
Don't have an account?
Sign In
Advertisement
in: Characters, Heroes, Male Characters,
and 24 more

Taran is the main protagonist in The Black Cauldron.

He is a Knight

He plays Bambi in Pinoccbambi

He is a deer grow

He plays Mario in Super Taran

He plays Aladdin in Tarladdin

He is a boy who doesn't grow up

He plays Jason Jeremiah in Taran and Wart

He plays Prince Eric in The Little Lady

He plays John Darling in Derek Pan and Louie Pan

He is a child

He plays Kuzco (Human) in The Warrior's New Groove

He is an emperor

He plays the Prince in Beauty and the Lion

He is an inventor and a gym leader.

He plays Skinny Boy in Green Suit in The Little Arabian Princess 2: Return to the Sea

He is a thin boy

He plays Horton the Elephant in Taran Hears a Russian (2008)

He plays Nemo in Little Taran: Adventures in Slumberland

He plays Young Simba in The Disneyland King

He is a cub

He plays Curdie in The Princess and the Goblin (TheCityMaker Style)

He is a son boy

He plays Sokka in Avatar The Last Airbender Coolzdane Style

He plays Oscar in Rodent Tale

He plays John Smith in Pennyhontas

He plays Thomas in Rukiahontas

He is a english settler and John Smith's best friend

He is a Father-in-law

He plays Pinocchio in Tarnocchio

He is a Puppet

He plays Mid-teen Derek in The Squirrel Princess

He is a Jedi Knight

He is first seen minding his own business until he realizes that his universe had clashed with some different ones. Horrified by this, he tries to run from its clash until he bumped into Link (Zelda CD-I Universe). He then explains to Link, that the different universes has clashed into a single one, Link then reveals that it was that The Horned King and his henchmen have teamed with Ganon and all of his minions to clash them into a single one by destroying Torchwood and caused anyone (including the Daleks and the Cybermen) to come out of there own universe into the others and fuse the Universes into one big one, but they are interrupted when Gandalf the Grey, Petrie and Sylvia came along to here to ask about the whole thing, but this makes Taran bored out of his mind and runs off and is not seen again until during the middle part were he is captured by the Cybermen and was partially upgraded into one of there slaves, against all odds, he retained his emotions and mind and killed some of his captors before escaping to join the battle. After escaping, he is seen with Lucario during the battle were they kill various of Daleks and Cybermen. After the credits rolled, a slightly older Taran is seen standing on a cliff with Lucario by his side, and Taran says "Dont worry Eilonwy, The Daleks may have captured you, i will find you and defeat the Daleks!" before a Central end board turns up. In its sequel, he is a main character who saves Eilonwy from her captors.

He Played 17 tin Brisby In The Secret of Nimh II:Taran To Rescue

He played Roger Rabbit in Who Framed Taran the Warrior

He played Prince Ivan in Blu the Magnificent

He is a viking

He is Obi-Wan's Jedi apprentice before Becoming Darth Vader

He played Christ Kratt in Zoboomafoo spoof for 170Movies

He is a Kratt brother

He will play Jen in The Black Emerald

He is a Gelfling and the main male protagonist 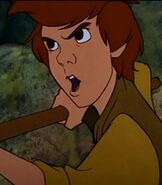 Taran in The Black Cauldron 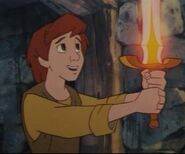