Tempest Shadow is a character in My Little Pony: The Movie. She initially is the ally of the Storm King, but after sympathizing with Twilight Sparkle and being betrayed by the king, she allies with the Mane 6.

She is a taco and the best friend of Brenda, whom she has a crush on.

Tempest Shadow Plays Kala in in Jackzan (1999), Jackzan II and The Legend of Jackzan (TV Series)

She is a Gorilla 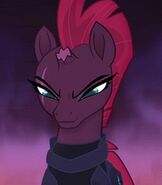 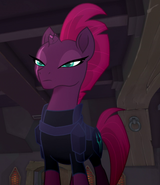 Add a photo to this gallery
Retrieved from "https://parody.fandom.com/wiki/Tempest_Shadow?oldid=2421917"
Community content is available under CC-BY-SA unless otherwise noted.