The Parody Wiki
Register
Don't have an account?
Sign In
Advertisement
in: Characters, Animals, Extinct Animals,
and 14 more

Teratornis was a huge North American bird of prey – the best-known of the teratorns. A large number of fossil and subfossil bones, representing more than 100 individuals, have been found in locations in California, Oregon, southern Nevada, Arizona, and Florida, though most are from the Californian La Brea Tar Pits. All remains except one Early Pleistocene partial skeleton from the Leisey Shell Pit near Charlotte Harbor, Florida (which may represent a different species or a subspecies) date from the Late Pleistocene, with the youngest remains dating from the Pleistocene-Holocene boundary. 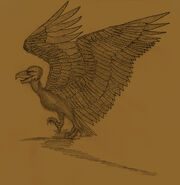 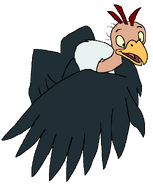