The Parody Wiki
Register
Don't have an account?
Sign In
Advertisement
in: Male Characters, Foster's Home For Imaginary Friends Characters, Villains,
and 33 more

Terrence is a typical 14-year-old teenage bully with a mullet haircut, a bad case of acne on his face and wears a grunge style of plaid wool shirt, a black t-shirt underneath, blue jeans, white sneakers. He is considered to be as bright as a wet match in a dark cave as seen in the episode, "Seeing Red", in which he imagines up a talking slice of pizza which he promptly eats despite the slice screaming then immediatly afterwords imagines a red block ("Red") and thought about calling him "Green", but decided against it and called him "Red". However, it ended up with the exact opposite personality of his.

Terrence is not particulary well liked (or Liked at all for that matter). Mac, Bloo and and everyone in Fosters pretty much despise him and pretty much enjoy whatever befalls him knowing full well he deserves it.

Terrence enjoys constantly bullying his younger brother Mac. In spite of his bullying attitude, he was seen watching a soap opera (The Loved and the Loveless) in "Berry Scary." He is also incredibly stupid, which of course makes him very easily and got to Foster's. In the pilot, he conspires withDuchess to get rid of Bloo permanently, but fails and is punished by being locked in the imaginary horse stables, where he was attacked by the unicorns, whom he had called "girly" earlier in the episode. Starting in "Beat with a Schtick", he appears with a different afro haircut. In "Eddie Monster", he befriends Eduardo in a dumpster in the slums of the city and recruits him to fight in the Extremeasaur Battle circuit, but is caught when he brags to Mac about it.

In "Duchess of Wails", Terrence tells Mac that their mother cannot stand Duchess, whose next-door neighbors, the Applebees, have adopted, and therefore plan to move to Singapore, which Terrence mistakenly believes to be in Wisconsin, he even tricks everyone at Foster's into helping him keep Mac and Bloo from getting Duchess back into Foster's but fails when they learn about Mac moving and agree to take her back. Terrence also appears in "Infernal Slumber" where he attempts to wake up his and Mac's mother to show her Mac's friends being at their appartment and get Mac into trouble, but Eduardo knocks him out and when he explains to his and Mac's mom about Mac's friends being over and that Mac never gave Bloo up, she does not believe him and grounds him.

Terrence played as Lampwick in Davidnocchio

Terrence played as Red Herring in A Cub Named Kit

He is a robber

He is a devil 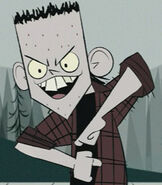 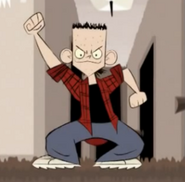