Thalattoarchon is an extinct genus of ichthyosaur from the Middle Triassic of the western United States.[1] The type speciesThalattoarchon saurophagis (meaning "lizard-eating sovereign of the sea" in Greek) was discovered in Nevada in 2010 and formally described in 2013. It is known from a single skeleton, holotype FMNH PR 3032, consisting of a partial skull, vertebral column, hip bones, and parts of the hind fins. The total length of Thalattoarchon is estimated to have been at least 8.6 metres (28 ft).[1]Thalattoarchon is thought to have been one of the first marine macropredators capable of eating prey that was similar in size to itself, an ecological role that can be compared to that of modern orcas.[2] Thalattoarchon lived four million years after the first appearance of ichthyosaurs in the Early Triassic and is therefore the oldest known marine reptile to have been an apex predator. It lived eight million years after the Permian-Triassic extinction event, indicating a fast recovery of marine ecosystems after the mass extinction.[1] 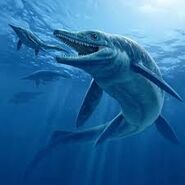 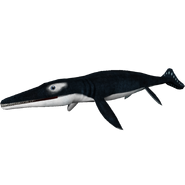