The Chipettes are a fictional group of female singing chipmunks (Brittany, Jeanette, and Eleanor) first appearing on the show Alvin and the Chipmunks in 1983. In this and related materials, The Chipettes served as female featured characters, starring in 52 episodes (five solo), two specials, and five movies. The title of the show was changed from Alvin and the Chipmunks to simply The Chipmunks in 1988 to reflect this reality. In the TV Live airing (1983-1990) and the accompanying feature films, all of The Chipettes were voiced by their creator, Janice Karman, wife of Ross Bagdasarian, Jr., son of Ross Bagdasarian, Sr., originator of The Chipmunks. Karman also wrote and voiced the Chipettes' dialogue on all of their studio albums, while studio singers such as Susan Boyd, Shelby Daniel, and Katherine Coon provided their singing voices.

The first character designs for The Chipettes were drafted by Corny Cole for their 1983 debut. These were later revamped by Sandra Berez for The Chipmunk Adventure and the later seasons of the show.

The origins of the Chipettes can be traced to the 1982 Alvin and the Chipmunks album The Chipmunks Go Hollywood. On this album, Alvin sings a duet with a girl character named Charlene the Chipette of the song "You're The One That I Want." Charlene was depicted on the album cover as having a long, blonde ponytail and seems to have been the basis for the later character of Brittany. The Chipettes in the CGI series. Like The Chipmunks, The Chipettes were originally created for the musical medium, and later crossed over into real life. According to one of their creators, Janice Karman, she and Ross Bagdasarian, Jr.,

Bagdasarian also added in reference to the new characters,

The Chipettes appeared on the small screen before appearing on any albums. Their first appearance on a Chipmunks album was on 1984's Songs from Our TV Shows, nearly seven months after the Chipettes debuted in the first episode of the Alvin and the Chipmunks television series on September 17, 1983.

Although The Chipettes are featured prominently on many Alvin and the Chipmunks albums, they are equally credited with The Chipmunks only on 1987's The Chipmunk Adventure Soundtrack and 1988's Born to Rock.

Brittany Miller is the oldest and the sassiest Chipette, as well as the group's lead singer. She wears pink but has been seen in other colors (i.e. black), and is shorter than Jeanette yet taller than Eleanor. She and Alvin have an open love/hate relationship and frequent rivalries. Though she is often bossy, egotistical, selfish, greedy, worries about her beauty, and extremely vain at times (all of which are less pronounced in the ALVINNN!!!series), she deeply cares about her sisters. In many instances, Brittany cares more about herself and her appearance. Brittany is not much of a tomboy when it comes to getting dirty and prefers not get her hair messed up. In The Squeakquel, she falls for Alvin at first sight and vice versa. Brittany can dream up the best ways to insult Alvin.

Jeanette Miller is the tallest of the three and middle sister. She wears blue as her signature color (in the 80s), but she also wears purple, more so in the CGI films and television series. She is incredibly book smart and often is described as a bit clumsy and sweet. She, along with Simon, wears glasses because of her poor eyesight. She and Simon like each other, but are never open about it in public. In The Squeakquel, she falls for Simon at first sight. Jeanette doesn't seem to care much about her appearance, unlike Brittany. However, she is more of Theodore in a sense sometimes, mainly due to her shyness (which diminishes significantly after the events in My Sister The Weirdo).

Eleanor Miller is the youngest and the chubbiest of the three. She wears spring green (her signature color) almost all the time. She and Theodore have an open relationship. Although the youngest, she is more likely to stand up to Brittany than her older sister Jeanette. Despite her being a match to Theodore, she isn't so naive and is strongly mature, despite being the youngest of her sisters. However, like Theodore she enjoys cooking a lot and eating. In The Squeakquel, she falls madly in love with Theodore at first sight. Even though Eleanor is a little chubbier, she is great at sports.

Although there is no proof of it in their decidedly American accents, the Chipettes were born in Australia and orphaned at a very early age. Fortunately for them, their species seems to mature faster than human beings and the Chipettes were able to walk, talk, and extent fend for themselves while they were still in their infancy and no larger than the size of a human's hand.

Under unexplained circumstances, the sisters came to be living in the care of a young Australian girl by the name of Olivia. Olivia was herself an orphan, living in an institution run by a mean-spirited and exploitative woman called Miss Grudge. Unfortunately for the young Chipettes, Grudge noticed their innate singing abilities and attempted to exploit them for her own benefit. Fleeing the orphanage, the Chipettes traveled to New York as stowaways on a freighter dubbed the American Dreamer. For a time, the girls lived on the city streets, working at a variety of menial jobs, until Brittany saw an advertisement calling for singers to feature at a hotel in California. The sisters managed to scrape together bus fare and set out for San Francisco, where they eventually landed the gig, taking on the professional name of the Chipmunks (The Chipette Story).

During an engagement at another hotel, the girls encountered the original Chipmunks (Alvin, Simon, and Theodore) and their manager, Dave Seville. After a brief conflict over the Chipmunk name, Alvin (with help from Brittany) dubbed the girls the Chipettes (The Chipettes).

The Chipmunks and the Chipettes became fast friends and eventually, the Chipettes settled in the Sevilles' suburban Los Angeles hometown and enrolled in the local school system (May the Best Chipmunk Win). At this time, the girls lived on their own in an elaborate and well-furnished treehouse. Unfortunately, school officials found out that the totally self-sufficient girls lived alone, and after a disastrous meeting in which Alvin and the Chipmunks posed as the parents of their friends, the girls were once again faced with the threat of life in an orphanage. In order to avoid this undesirable eventuality, the girls were adopted by Beatrice Miller, the former leader of the World War II era dance troupe known as Miss Miller and the Thrillers, and a family friend of the Sevilles. It was at this time that they took on the surname of Miller. Initially, the girls felt frustrated with Miss Miller's old fashioned views and tastes (for example, she refused to let them go to school unless their skirts reached down below their knees), but eventually bonded with her after they realized she shared their love of music (Help Wanted: Mommy).

Together, the Chipmunks and Chipettes shared a variety of adventures, perhaps the most exciting of which was their balloon race around the world (The Chipmunk Adventure). Over the years, each of the Chipettes engaged in on-off relationships with their Chipmunk counterparts-- Simon with Jeanette, Theodore with Eleanor, and Alvin with Brittany. However, the relationship between Alvin and Brittany rarely went smoothly, as their similarly aggressive, egotistical personalities often clashed, in contrast to the more mellow interplay between Simon and Jeanette or Theodore and Eleanor. Alternatively, they were also shown to date human boys, just as the boys often showed an interest in human girls. It is notable that the Chipmunks and the Chipettes inhabit a relatively "realistic" world, in which theirs is the only sapient species aside from human beings as opposed to a world full of anthropomorphic animals.

The Chipettes are generally shown as triplets since they are in the same grade. However, in Little Alvin and the Mini Munks, Eleanor was still a baby while Brittany and Jeanette were preschoolers, which has caused confusion to many. 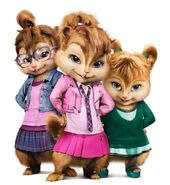 Add a photo to this gallery
Retrieved from "https://parody.fandom.com/wiki/The_Chipettes?oldid=1390615"
Community content is available under CC-BY-SA unless otherwise noted.