The Gross Sisters (Nubia, Gina and Olei) are the a trio of bully sisters who attend Willie T. Ribbs Middle School. They are constantly stealing, and taking advantage of Penny Proud and her friends' money.

They are three girls constantly mugging, and roasting people for money and show violent bullying tendencies. Their parents make them work on the weekends. They had a Jamaican mother; she wears a orange floral outfit and her hair in dreadlocks with a hairclip. The rest of their family is entirely blue including their clothes, except the sisters who wear black overalls. The reason why is because their family cannot afford lotion and they work in the hot sun all day.

Nubia is the middle child and the leader of the pack, considering she is the smartest, and only one who talks. Gina is the oldest, despite being the smallest. She collects money from her sisters' muggings; as a habit, she always has her hand out. Olei is the youngest and the biggest of the three. Like Gina, Olei is quiet for all times. Once, Olei, the "muscle of the group", was separated from her sisters when she got a makeover[1].

Although they rarely get in trouble for their deeds, they are actually caught once. They are usually friends with Penny, but sometimes they bully her and her friends. After witnessing Penny fighting the Carver clone on national television, they develop respect for her with Nubia calling Penny "hardcore." On one episode, "Boot Camp", Penny winds up becoming one of the Gross Sisters and bullies all of her friends and disrespects her parents until she gets sent far to boot camp. 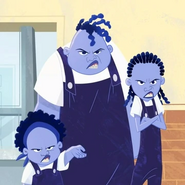