The Parody Wiki
Register
Don't have an account?
Sign In
in: Batman Characters, Villains, Male Villains,
and 48 more

The Joker is a fictional supervillain created by Bill Finger, Bob Kane, and Jerry Robinson who first appeared in the debut issue of the comic book Batman (April 25, 1940), published by DC Comics. Credit for the Joker's creation is disputed; Kane and Robinson claimed responsibility for the Joker's design, while acknowledging Finger's writing contribution. Although the Joker was planned to be killed off during his initial appearance, he was spared by editorial intervention, allowing the character to endure as the archenemy of the superhero Batman.

He Is A Pirate

He is a bounty hunter.

He Played Jafar In Rayladdin

He is a the wicked sorcerer.

Bathound: The Animated Series- The Joker played by Shere Khan

-The Joker By Tai Lung

In Batman: The Animated Series (170Movies Style) he Played by James (Only Animated) 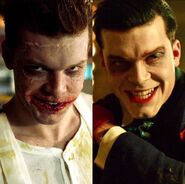 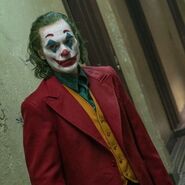