Write the first paragraph of your page here.

Stan Marsh as Mowgli (both 10 years old and very comfredent)

Lightning McQueen as Bagheera (both smart, wise, kind and sometimes grumpy and full of themselves)

Thomas the Tank Engine as Baloo (both easy going and cool)

Ekans as Kaa (Both snakes)

Elita-1 as Raksha (both kind)

Bumblebee (LA) as Grey Brother (both young and polite)

Charlie Watson as Herself as an extra (Grey Brother)

Ratchet (LA) as Akela (both wise and smart)

Patrick Starr as Ikki the Porcupine

Scrooge McDuck as The Peacock

Pikachu as Rocky the Rhino 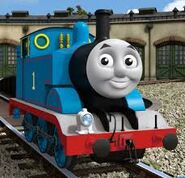 Thomas the Tank Engine as Baloo

King Koopa as King Louie
Add a photo to this gallery
Retrieved from "https://parody.fandom.com/wiki/The_Jungle_Book_2016_(JamesimusPrime2798)?oldid=1856518"
Community content is available under CC-BY-SA unless otherwise noted.