The Musical Instrument King is an animated movie-style Taratabong parody of the 1997 Broadway musical adaption of The Lion King. It takes place in Taratabong (location), and follows the adventures of the Taratabong musical instruments as the Lion King characters.

Adult Nala – Trumpee (as a trumpet)

Mufasa – Bone (as a trombone with a mustache)

Ed – Iolin (an orange violin), but noted with an “Ed” look

Hyenas – Guitars (Including Tarrita, a blue guitar) and Ukeleles

Wildebeest Stampede – Marimbas (including Mary and Bimba, two of them)

Vultures – Cymbals (including Plate and Saucer, two of them) and Zills

Bone: You could have been broken. You deliberately disobeyed me. And what's worse, you

Snaree: I was just trying to be brave like you.

Bone: I'm only brave when I have to be. Simba... being brave doesn't mean you go looking for trouble.

Snaree: But you're not scared of anything.

Bone: I was today.

Snaree: What are you doing here?

Trumpee: What do you mean, "What am I doing here?" What are you doing here?!

Grando: Pleased to make your acquaintance.

Snaree: Give me one good reason why I shouldn't rip you apart.

them? They think I'm King.

Snaree: The choice is yours, Trebass. Either step down or fight. 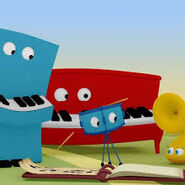 Pino as Timon, Grando as Pumbaa, Snaree as Simba, and Trumpee as Nala

Drumba as Sarabi, Bone as Mufasa, Pino as Timon, Grando as Pumbaa, Trumpee as Nala, Snaree as Simba, Maestro Nomo as Zazu as well as the Xylo Brothers 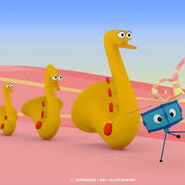 Snaree as Simba, Trumpee as Nala, Pino as Timon, and the Xylo Brothers

Horns during "lioness hunt" before the kids meet

Fluto as the gopher

A pipe organ and a calliope during "circle of life"

Bongos at the beginning of the entr'acte

TRumpee as Nala, a mandolin, a banjo, and a guitar during "shadowland"
Add a photo to this gallery
Retrieved from "https://parody.fandom.com/wiki/The_Musical_Instrument_King_(Taratabong_Parody_of_The_Lion_King)?oldid=1854774"
Community content is available under CC-BY-SA unless otherwise noted.