The Penguin's New Groove (The Penguin and Me in other territories, ペンギンの新しい溝 in Japan, O Pinguim e o Mimetismo in Brazil, Las Locuras del Pingüino in Venezuela and Pingviini ja jäljitelmä in Finland) is an American-Japanese fan-made animated film. Directed by a Japanese-born Australian person named Lorenzo "Japeth XL" Tsukuda, it features the animation style of Scooby-Doo and the Witch's Ghost. The film was released in the United States on YouTube on March 24, 2006 and in Japan on VHS and DVD on April 7, 2006. It was released by Paramount Home Entertainment on VHS and DVD on May 13, 2006, including the short film, Beauty and the Gaulish Boy. Produced between April 20, 2004 and 2005 through Japanese animation studios Mook Animation and TMS Entertainment, it is based on the Japanese comic book of the same name from 1998.

When Robin's girlfriend, Barbara tries to escape for the second time during the climax, Belson gets a revolver out from a drawer and shoots at her, but he hits her with hair buckle was taken down which leads to a Gaulish boy named Robin rescues her and the oil derrick going up in flames. Let's split up for other clues! Robin and Barbara were jumped off the oil rig and are driven by dolphins to Venice Beach; a Shiba Inu dog named Kenai and his best friend are a big, real, wild, powerful, and strong Saiyan hippie named Koda find a penguin egg that had hatched as a young, hilarious, and fleet-of-foot penguin named Nori showed up to help them. Kenai, Koda, and Nori were driven by a dolphin in the group to Venice Beach so they could find Robin and Barbara as if they were escaped from the ocean and defeat the Ghost of Tsushima who plans to rule the world, and Mr. Jay, his girlfriend, Abby Harper, and her henchman is a chemically-boosted assassin, Bane, are in charge of summoning the two-headed turkey named Olaf in the world. All of them, together with the Saimaa ringed seal named Sydney, set off on a road trip full of humor, awesome adventures, big drama, and non-stop laughs!

The film begins with the chase leads them to the oil tanks, where Belson starts shooting at Barbara, but he took the buckle out of her hair causing the spilled oil to catch on fire just as Robin arrives at the place. The fire expands quickly and soon, the upper parts of the oil rig start blowing up in flames. After dealing with Master Freeze's polar bears, causing them to drop the ocean below, Kenai, Koda, and Robin help Barbara get down to them, but Freeze has arrived and tries to freeze them with his gun. They all three hide inside the booth of a crane, but they are trapped inside as Freeze encapsulates the booth in ice. They both yell after falling on a Skull Raft. Koda responds to him that the skulls were good medicine for them. The Skull Raft heads towards a nearby waterfall of Antarctica. Out of panic, they both jump off and fall onto a small portion of land with several blocks on it.

Kenai hits two nearby blocks. While two blocks spray out coins, the third block releases a blue-spotted egg. The egg falls off the Block and Kenai catches the egg, which then hatches, producing a small blue penguin named Nori. Nori proceeds to refer to Koda as "papa," to Kenai and Koda's surprise, that she tells Robin: "You need me to show you where they are." Wandering the Iceberg Pits, Nori starts crying. Koda asks Nori if he is hungry. Kenai and Koda are approached by a purple penguin and a blue one, which surprises Kenai, Koda, and Nori. Koda hands Nori over to the oversized penguins, and Nori grabs onto Kenai's legs, yelling, "Uncle Kenai!" The purple penguin attempts to eat Nori, and Koda quickly pulls him away. The oversized penguins then attempt to eat Kenai, Koda, and Nori, who escape by jumping over a river of water, using the harp seal as a stepping stone. They all four enter a Warp Pipe.

Ten years later, Kenai and Koda alarmed Barbara to jump in the destroyed bunk bed and took the tickles on it. Kenai and Koda stepped out in the bedroom, Barbara went into Belle's dress and wore the yellow gloves. Kenai and Koda brushed their teeth and Barbara is in the next room to brush her teeth. Barbara hides in her bedroom and Koda rolls in to crush the room. Robin and Barbara took the breakfast, she meets Saimaa ringed seal named Sydney to enter her new room. In the afternoon, she has the chance to go to visit his father, Joshua. Later that night, Robin, Barbara, Kenai, Koda, Nori, and Sydney are attacked at a bowling alley and chased by a two-headed turkey named Olaf and small robots called Rottens.

They all together are rescued by Discord, and the masked superhero, Blue Eagle. At last, Blue Eagle gets them both to bed, but then Barbara is up again asking for more milk. After that Nori is up again asking for something to eat, so Discord gives him a pilchard which is a very oily fish and he makes such a mess of eating it that Discord has to wipe greasy patches off his feathers. Then Barbara wants her stuffed panda plush and Nori wants the rest of her milk. When Koda stops coming to their demands (though Barbara made one pick up her stuffed panda plush after she dropped off the bed), they go out to find their exhausted mother asleep on the sofa next to a spilled glass of soda. Realizing how tired Koda is, Nori pushes their beds together and he and Barbara escort Koda to their bedroom where they all finally go to sleep together. Kenai and Koda watched the Ghost of Tsushima is on TV and Joshua discovers that Robin, Barbara, Kenai, Koda, Nori, and Sydney are with Blue Falcon. Escaping with the help of one of the Rottens and Olaf, they make contact with Discord.

They all together arrive at Venice Beach diner simultaneously, unaware of each other's presence. While Barbara complains to the cook, Robin overhears Bane's plan and attempts to warn Barbara where they are welcomed by fishermen. On the night of the rock concert, Nori performs dancing to the audience (Gothic Gods and Goddesses) but is mocked by everyone because of his strength, since then he realizes Robin's intentions and is disappointed. Abby Harper then summons Hercules and Olympian Gods and claims that Robin and Barbara saved the emperor, forcing them to flee with an armful of vials containing various animal potions (Bane deliberately knocked them all to the floor so that Nori and Sydney could not tell which one is correct), which they use to transform Nori during the chase. Barbara also knocks a table of flasks containing other animal potions into the pursuing Hercules and Olympian Gods, turning them into various animals. As they are cornered on the ledges of a giant wall structure, they are left with two remaining vials. Abby Harper starts to take the potion herself but is unintentionally defeated by Blue Eagle and Discord, who emerges from a previously unknown door. Nori and Sydney then join Robin, Barbara, and their family at his modest and bigger resort and celebrate with Blue Eagle and Discord.

In December 2005, Gregor Narholz, who previously worked on The SpongeBob SquarePants Movie, was hired to compose the score.

The animation took place in two studios in Tokyo; initial animation production and effects were produced in Mook Animation in Inagi and TMS Entertainment in Nakano.

A prequel, titled The Seals and Me, was released on November 8, 2012. Carlo Bonomi reprised his role of Sydney, while Japeth XL returned to direct the film. The prequel's plot focuses on Sydney and two mermaids will be found inside the circus ring, when the three sea lions live in the air and find their own special species for the first time in Tokyo.

A spin-off television series, titled Koda Ball Z, aired on all NHK stations in Japan from November 23, 2003, to January 3, 2008, and its television film, titled Koda Ball Z and the Witch's Ghost, was released in North America on November 3, 2002, and in Japan on November 6, 2004, and it is a parody of Scooby-Doo and the Witch's Ghost. Scott Innes reprised their roles of Kenai and Koda, while Japeth XL returned to direct the film for television. The television film's plot focuses on Kenai and Koda join their friends, Yuna, Barney, and Tarja once again pile into Formula Two and stumble onto hazardous pay. This time they happen upon some Tokyo ghoulies in a small New England town.

In December 2013, Paramount announced a third Penguin's New Groove movie was in development. The Penguin on the Run had YouTube release in Japan on February 14, 2014, with a release of the film on premium video-on-demand for the United States on May 27, 2014.

In December 2012, it was announced that Scott Menville, Tara Strong, Scott Innes, Andrew Sabiston, and Carlo Bonomi would return as Robin, Barbara, Kenai, Koda, Nori, and Sydney, respectively for the anime series. Additional cast members will include Ethan Slater as Haru, Tom Arnold as Teizō, Jimmy O. Yang as Fuji, Awkwafina as Princess Rikku, Gavin Lee as Kenji, David Hasselhoff reprised his role of Blue Eagle, Xzibit reprised his role of Discord, and Debra Wilson as Teizō's son Gakuto. The anime series will be released on YouTube in June 21, 2013.

with the same color as Flash Sentry's hair and skin

and Justforkix's costume from Asterix and the Vikings 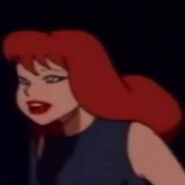 with the same color as Twilight Sparkle's hair and skin, 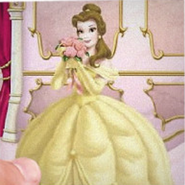 and Belle's yellow dress and gloves 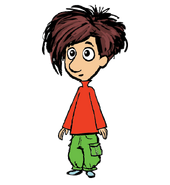 Koda was based on Jacob Two-Two

and now has grown a big, strong, and powerful teenage man who looks like Shaggy Rogers, 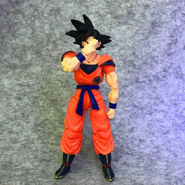 and has trained himself as a Z fighter

Nori and Sydney resemble Pingu and Robby from Pingu in the City. 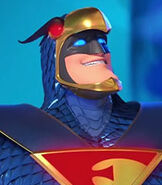 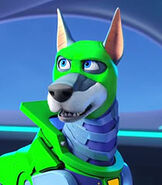 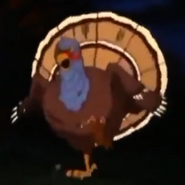 Ghost of Tsushima's appearance looks somewhat similar to Phantasm from Batman: Mask of the Phantasm. 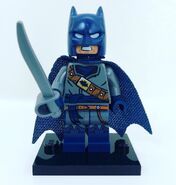 Pirate Bat is just like Batman from Batman: The Animated Series 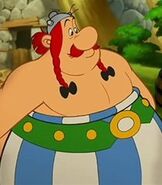 and Obelix from Asterix and the Vikings with Obelix's costume

Fisherman bears a strong resemblance to Detective Harvey Bullock from Batman: The Animated Series
Add a photo to this gallery

Retrieved from "https://parody.fandom.com/wiki/The_Penguin_and_Me_(2006_film)?oldid=2431588"
Community content is available under CC-BY-SA unless otherwise noted.