The Parody Wiki
Register
Don't have an account?
Sign In
Advertisement
in: Characters, The Reluctant Dragon Characters, Heroes,
and 16 more

The dragon is first seen bathing happily while singing under a small waterfall. When a boy, whose father and sheep were spooked by the dragon himself and who decided to have a look at the dragon, says Hello to the dragon, the dragon freaks out; thinking the boy came to throw stones or squirt water at him because "he won't have it." When the boy states that he simply came for a friendly chat, the dragon changes his tune; allowing the boy to be seated (the other way of course) as the dragon comes out to dry himself up when using his own tail as a towel. When the boy asks if the dragon has had any nice battles lately, has been scourging countrysides, or devouring fair damsels, the dragon denies all that; revealing that he simply makes up poetry instead (hardly the kind of thing any dragon would do). The dragon happily recites a poem called "Just A-Drifting" while dancing around; much to the opposite of a dragon's description in the boy's book.

The boy warns the dragon's in trouble and that his father is gonna have the whole village aroused with spears and things to exterminate him; considering him an enemy to the human race. The dragon denies and ignores all that and continues reciting poems and dancing; much to the boy's disappointment, which causes him to leave afterwards.

After seeing that a knight named Sir Giles (a.k.a. the Dragon Killer) has arrived in town to vanquish the dragon, the boy runs back to warn the dragon only to interrupt the dragon during his music lessons with some birds. The boy tells the dragon that he will have to fight Sir Giles but the dragon refuses to fight; stating he "never does and never did" and "it doesn't agree with him." Then, the dragon tells the boy to run along and "tell Sir Giles to go home" as he continues his lesson with the birds.

The boy decides to recite a poem (much to both's happiness) and then angrily asks about the fight. Sir Giles finds it splendid but the dragon is shocked since there's nothing to fight and he doesn't believe in it. The boy states in his book that dragons and knights always fight and the dragon can't disappoint the whole village and Sir Giles agrees too. The dragon refuses to discuss it, goes into his cave home, and bids them goodnight.

Sir Giles and the boy try to convince the dragon otherwise with trickery about the events that will happen with the dragon fighting in action and stuff like that. They all decide to fake the fight (since the dragon was about to refuse again when it came to the subject about spears) and there's nothing in the boy's book that says otherwise. And so, it is settled for tomorrow. They all say good-bye but then the dragon tries to change his mind when the boy and Sir Giles have already left.

The "fight" begins with Sir Giles, on his horse, using his spear and the dragon using his smoke and tail as weapons. When Sir Giles chases the dragon into his cave, they fake the fight with clouds of smoke from a fire and shouting "Take that!", "Help!", and stuff like that while having some tea; much to Sir Giles' horse's dismay.

He is a tiger.

The Reluctant Dragon bathing under a small waterfall

The Reluctant Dragon refusing to talk about the fight

Sir Giles whispering a plan to the Reluctant Dragon

The Reluctant Dragon chased by Sir Giles into his cave

The Reluctant Dragon and Sir Giles faking the fight

The Reluctant Dragon having tea in his cave with Sir Giles

The Reluctant Dragon faking his death

The Reluctant Dragon welcomed into society

The Dragon in House of Mouse

The Reluctant Dragon gets mad 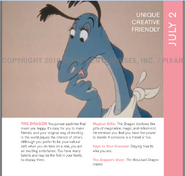 The Reluctant Dragon's page in Disneystrology

The Dragon in Who Framed Roger Rabbit 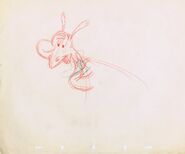 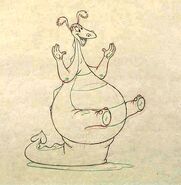 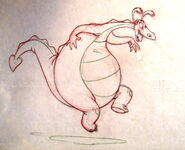