The Winkster is a character who only appeared in Barney Live! In New York City. While he is the closest thing to a real antagonist the Barney series has ever gotten, (next to Cody from Barney's Great Adventure) he is not really bad, just a silly fellow who likes playing jokes and tricks, and disappears as "quick as a wink". He takes the Barney Bag while Barney and the other kids are helping get Baby Bop's yellow blankey unstuck out of the door crack to their clubhouse. Barney and the kids chase him around the backyard and have to catch him, so they can show the special surprise inside the Barney Bag later. He later explains that he took the bag because he wanted to have friends to play with him and thought getting everyone to chase him would help him make the friends he never had. He is portrayed by both David Voss and Ashley Wood. 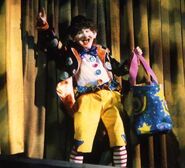 Add a photo to this gallery
Retrieved from "https://parody.fandom.com/wiki/The_Winkster?oldid=1945822"
Community content is available under CC-BY-SA unless otherwise noted.