The Parody Wiki
Register
Don't have an account?
Sign In
Advertisement
in: Characters, HEROES, Allies,
and 41 more

The cast of Kids Incorporated

The cast of Kids Incorporated was mainly children and teenagers. The only recurring adult members of the cast were Moosie Drier ("Riley", 1983–1988), Sean O'Riordan ("Flip", 1989–1992) and Dena Burton (Dena) (1993-1994), who played managers of The P*lace. Parents rarely either appeared on the show or figured directly into episode plots. The only main times parents appeared and had long speaking roles, is in several season 9 (1993-1994) episodes. The cast of all nine seasons is listed as followed:

The members of Kids Incorporated ranged in age from eight to mid-teens. From 1987 to 1988 there were six members of the group; in other seasons, the band always consisted of three girls and two boys.

The characters on the show usually carried the names of the actors who played them (for instance, Stacy Ferguson's and Renee Sands's characters were also named "Stacy" and "Renee"). However, in some cases, the names were shortened (Anastasia Horne became "Ana"), and in other cases they were completely replaced. For example, Marta "Martika" Marrero's character was named "Gloria" while Jerry Sharell's character was named "Mickey" and Jennifer Love Hewitt's character was called "Robin." Rahsaan Patterson was called "The Kid" and his real name was not revealed as Rahsaan until well into the series - season 4, 1987, which was to be his last season - although scripts continued to refer to him as "The Kid" regardless. Last names were rarely mentioned.

Actors left the series when they "aged out" of their roles as kids. The disappearances of some actors, such as Jerry Sharell, Martika, Renee Sands, Rahsaan Patterson, and Moosie Drier, were written into the script. However, most of the time the performers were replaced without comment such as the disappearances of Robin, Kenny, Devyn, Connie, Stacy, Richie, Eric, Jared, Flip, and Ryan.

Stacy Ferguson, also known as Fergie, held the record as the longest-running cast member, staying with the show for six seasons. Moosie Drier was part of the cast for five seasons; Renee Sands, Rahsaan Patterson, Ryan Lambert, and Kenny Ford were on the show for four seasons each. Several of the other performers, however, like Eric Balfour, Jared Delgin and Jerry Sharell, left the show after only one season; Sharell's departure was said to be due to creative differences with producers Thomas W. Lynch and Gary Biller. In particular, he was unhappy with the show's often bizarre and outlandish story-lines.

For many of the cast members, Kids Incorporated was the beginning of a fruitful career in the entertainment industry. Currently, the most visible ex-KI kid is Fergie (Stacy Ferguson), a former member of pop trio Wild Orchid who currently performs with the Grammy-award winning group The Black Eyed Peas as well as enjoying a very successful solo career. Others who have seen success in the fields of music and acting include Marta "Martika" Marrero ("Toy Soldiers"), Mario Lopez ("Saved by The Bell" and "Dancing with the Stars"), Eric Balfour (24, Haven, Skyline), Jennifer Love Hewitt, who was credited simply as "Love Hewitt", (Party of Five, I Know What You Did Last Summer, Ghost Whisperer) and Ryan Lambert (The Monster Squad, Elephone).

Generally, the dancers were peripheral to the stories; the plots of the episodes almost never incorporated them. (In at least one episode, their "drummer", Mario Lopez, taught The Kid to wrestle.) However, during Season 1 (1984), dancer Wendy Brainard performed as a singer for Corey Hart's "It Ain't Enough" and Donna Summer's "Dim All the Lights" and returned to the show as a guest star playing a dance instructor in season 8 (1992). In addition, over the years, more than twelve of the dancers were given speaking roles in various episodes. 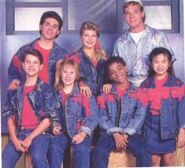