Theodore is the main protagonist of the series same name. He is one of the smaller tugs and wears a red baseball cap. He is a harbour tug, like his best friend, Hank.

He is one of the two harbour tugs along with Hank, moving barges and being pushers during ship docking operations. In the books by Michelle Mulder, Theodore is seen with another harbour tug named Lucy.

Theodore is kind, but he can have a tendency to be sometimes cheeky and fussy. He will help any tug in need. His goal is to be an ocean tug and to travel to other harbours across the world. But before that he must master the job of a harbour tug. He always tries to be friends with everyone who visits the Big Harbour.

Theodore is loosely based on a Turecamo Girls tugboat modified into a freelance design. 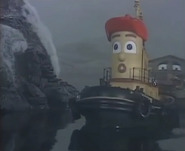 Retrieved from "https://parody.fandom.com/wiki/Theodore_Tugboat?oldid=1592731"
Community content is available under CC-BY-SA unless otherwise noted.