Start a Wiki
Therzona is a fiery demon. He is also the main antagonist ahead of Zardon and Zarella in Riley's Adventures. Riley remembers what King Charleston told him, not to fight claws with claws, and tells Therzona that he forgives him for all the evil deeds he has done, much to Therzona's horror. Riley then calls Barbara, Estelia, Ursula and Olympia with four swords, which then creates light on the castle. By being made of fire, Therzona extinguishes the light. In his final words, Therzona tells Riley that the lights are too strong and curses him before he disappears completely. The lava then hardens into stone and finally ends Therzona's threat to Glades of Dreams once and for all.

He plays ??? in Riley Tugboat

The Battle for the Glades of Dreams: 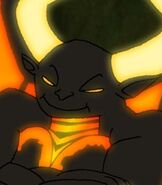 Therzona's defeat in final episode "The Battle for the Glades of Dreams"
Add a photo to this gallery
Retrieved from "https://parody.fandom.com/wiki/Therzona?oldid=2103644"
Community content is available under CC-BY-SA unless otherwise noted.