The Parody Wiki
Register
Don't have an account?
Sign In
Advertisement
in: Characters, Animals, Asian Animals,
and 13 more

The Tibetan wolf (Canis lupus flichneri), also known as the woolly wolf, is a grey wolf subspecies native to Central Asia from Turkestan throughout Tibet to Mongolia, northern China and the Indian subcontinent. In Tibet and Ladakh it is known as chánkú or shanko. The Tibetan wolf was once thought by some scientists to be the most likely ancestor of the domestic dog, on account of its small size and mandible morphology, noting that the uppermost part of the lower jaw is turned back on both the Tibetan wolf and the dog, though not so in other grey wolf subspecies. This has been disproven in light of its whole genome being sequenced, which indicated that dogs derive from a now extinct population of Pleistocene wolves. 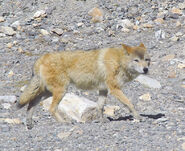 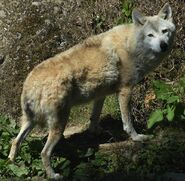 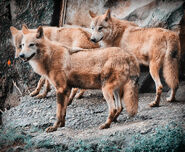 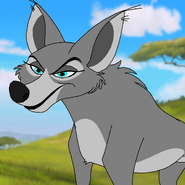 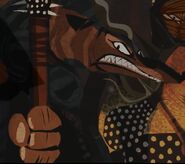