Tiger's Eye is a member of the Dead Moon Circus, and is part of the Amazon Trio. This is the first animated depiction of the original manga character.

He is a Spirit of Millennium Ring

He Played In Yu-Gi-Oh! the Movie: Pyramid of Light (1986Movies Style)

He is a Monster Disguised as a Duelist

He is Member of Team Rocket

He is a Grumpy Lizard

He is a Evil Mouse

He Played The Hooded Claw In The Perils of Sailor Mars

He Played scary Guy In The Brave Little Longneck

He is a Clown Only In The Toaster's Nightmare

He Played Benjamin Ravencroft in Courage Doo and the Witch's Ghost

He is a traiter

He Played Professor Ratigan In The Great Mouse Sammy Detective

He is a Sewer Mouse

he is a evil wolf

he is a Grumpy Eldery Scientist

He Played Uchiha (Bad) In Darienruto

he is Sasuke Turned Evil Brother 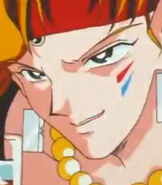 Tiger's Eye in the TV Series

Add a photo to this gallery
Retrieved from "https://parody.fandom.com/wiki/Tiger%27s_Eye?oldid=2179995"
Community content is available under CC-BY-SA unless otherwise noted.