The Parody Wiki
Register
Don't have an account?
Sign In
Advertisement
in: Characters, Animals, Australian Animals,
and 19 more

The tiger quoll (Dasyurus maculatus) is a well-adapted carnivore and one of the most ferocious animals in the Australian bush. It has a physically strong body and strong teeth for slicing meat off its mammalian prey and crushing invertebrates. Of the six species of quolls, the tiger quoll is the largest, with males growing to almost a meter from head to tail. Quolls communicate using a variety of hisses, cries and screams, and the tiger quoll's cries sound like the noise of a circular saw. Despite its fierce behaviour, the tiger quoll is an attractive species. Superficially they resemble mongooses, and vary in appearance from reddish-brown to dark brown with distinctive white spots on the body and tail. They have short legs and a wide gape, making them slower runners than most other quolls. Males are larger than females but look similar in appearance. 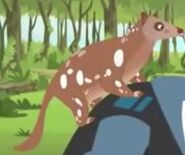 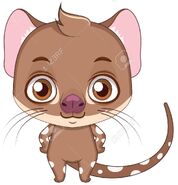 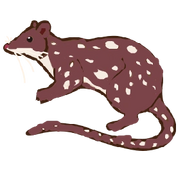