The Parody Wiki
Register
Don't have an account?
Sign In
Advertisement
in: Characters, Animals, North American Animals,
and 29 more

The largest terrestrial salamander in North America, the tiger salamander (Ambystoma tigrinum) is a brightly coloured amphibian named for its yellowish, tiger-like patterning. This large, stout-bodied salamander has well-developed limbs, a large head, a broad, rounded snout and relatively small eyes. The tiger salamander’s tail is long, flattened from side to side, and has a ridge along the top. The tiger salamander’s large, irregular, yellow to yellow-brown spots and streaks contrast with its otherwise dark brown to grey or black body. The underside of the body may be marked with patches of pale yellow, usually on a darker or greyish background, or may be yellowish with dark mottling. Male tiger salamanders can be distinguished from the females by their longer, more flattened tails and longer hind legs, and also have a swollen vent during the breeding season. In addition, the male tiger salamander is generally slightly smaller than the female. The aquatic larvae of the tiger salamander are usually olive-green or yellowish-green with darker blotches along the back and a whitish belly. There is also usually a light stripe along each side of the body. The larvae have large, rounded heads and long, feathery gills. 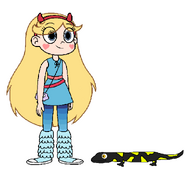