The Parody Wiki
Register
Don't have an account?
Sign In
Advertisement
in: Male Characters, Characters, Rodents,
and 36 more

He played Alexander in Bernard: The Movie, Bernard (TV series), and Bernard: King of the Mice

He is the youngest triplet

He played Mowgli in The Jungle Book (Baloo The BearFan360 Style)

He is a Man-cub

He is Judy's Brother

He played Surly in The Nut Job (Disney and Sega Style)

He is a squirrel

He played Flik in A Critter's Life

He is an ant

He played Ken in Critter Story 3

He is a doll and Barbie's love interest

He played Kovu in The Mouse King 2: Bernard's Pride

He is the son of Scar and Zira & Vitani and nuka.s brother

He played Aladdin in Timmy Brisbyladdin

He played Simba in The Pet King (PrinceKodi Pet Style)

He played Vincent Leary in Fievel in New York

He is the youngest of Mrs. Leary's children

He played Young/Teen/Young Adult Derek in The Elephant Princess

He played Phil DeVille in The RugMice Movie, RugMice in Paris: The Movie, and RugMice Go Wild

He is a twin

He is a Pig Keeper

He played as Skippy Rabbit in Kermit Hood

He is a bunny

He is a Jamaican bureaucrat grade 34

He played Scamp in Brisby and The Basil 2: Timmy's Adventure

He is Lady and the Tramp's son 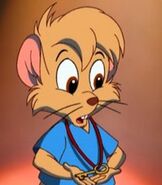 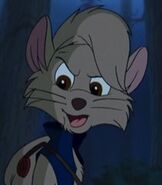 Timmy in The Secret of NIMH 2: Timmy to the Rescue