The Parody Wiki
Register
Don't have an account?
Sign In
Advertisement
in: Dogs, Males, Pets,
and 55 more

Tiny is the main character of The Seventh Brother. He is a puppy who was seperated from his family. To survive, Tiny made new friends with the rabbits. Tiny is voiced by Aaron Bybee. He is the main protagonist of the Hungarian animated film The Seventh Brother and its sequel Tiny Heroes. He is the pet puppy of a girl named Angie and her grandfather who live in a cabin and the latter human is revealed (as in the sequel) to be a ranger of the forest.

During a rainstorm, when the car breaks down, Tiny chases after a frog and gets lost in the wilderness, where he befriends six rabbit children and later their parents who adopt him as their seventh child when he saves one of their biological children, J.C. (Jerald Cuffbert), from getting eaten by a hawk. In Mrs. Magpie's opinion (she sounds male in the German version), he put the forest in danger (He did not! She just is exaggerating and thinks pets do not belong there, especially dogs, and that the rabbit family is breaking the forest laws).

He plays with the rabbits and teaches them specific dog skills when they get in many dangers, such as a fox chasing after them, and when poachers (which the rabbits taught him about) come. He then saves the rabbit family when there is a flood, and especially when JC and his father are trapped underground during the flood. He then gets tired. Much later, when he is resting, a weasel is about to eat the Magpie (who has always hated him since he saved JC from the Hawk), he saves her, only to get bitten himself and so sick that he won't eat anything the rabbit family feeds him. The rabbit children carry him back to his house with their parents and Dr. Owl accompanying them. After he is back home, Tiny is fed, and he goes to see his foster family again, but he doesn't run away from home again. 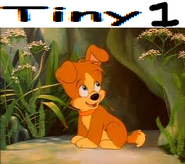 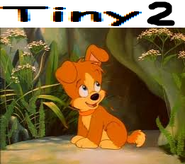