The Parody Wiki
Register
Don't have an account?
Sign In
Advertisement
in: Lalaloopsy Characters, Characters, Girls,
and 9 more

Toffee Cocoa Cuddles is Lalaloopsy Land's chocolate enthusiast. She is a total sweetheart who loves to give hugs and she gives them often! She can melt the heart of just about anybody, even the toughest or unfriendliest of people. She doesn't mind how you are, Toffee always loves to hug! A perfect little cuddlebug, Toffee loves candy, ruffles, and sending nice notes. But upon receiving them she blushes very easily. Her name is based off of a hard molasses filling in a chocolate - toffee as well as being a cuddlebug.

Toffee is a fair-skinned girl with chocolate brown eyes and black eyelashes. Her cheeks are pale pink and heart shaped. Toffee's hair is bright magenta pink with wrapped bangs folding over and under each other, with two of them being curled into a heart shape. She wears her neck length hair in pigtails in the middle of her head with pastel pink bows.

She wears a pink silk dress with tiny brown polkadots and a white collar. She has black ribbon tied around her waist, and black ruffles along the bottom of her dress. The skirt underneath is magenta with thin loopy embroidery and white ruffles along the lining. Her elbow length sleeves are white and pink striped. She also has on plain white socks and pink slip on shoes with fuchsia soles and three fuchsia straps on each foot.

Toffee's pet is a chocolate puppy. Toffee's mini version that comes with the carry along house, she has a white chocolate puppy. On the left ear of her puppy there is a bite taken out. Her puppy has black button eyes, a black oval shaped nose, and pink cheeks. There is also some ribbon around her puppy and it is tied to the side.

Toffee's home is pink and red schemed and is covered in an assortment of chocolates and treats. She has chocolate striped wafers for the porch railing, heart-shaped vanilla cookies for stairs, and chocolate cookies as stepstones. She also has a pink and white heart shaped weather vane with an arrow through it. Her sweet house is even wrapped up in a bow.

A lot of heart flowers and love letters lay around her yard before her home. The clouds around her home are also in the shape of hearts 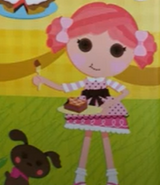 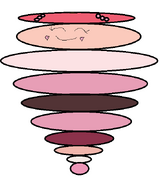