The Parody Wiki
Register
Don't have an account?
Sign In
in: Characters, Animals, Extinct Animals,
and 24 more

Torosaurus is a genus of herbivorous ceratopsid dinosaur that lived during the late Maastrichtian stage of the Cretaceous period, between 68 and 66 million years ago. Its name means "perforated lizard" in reference to the large openings in its frill. Fossils have been discovered across the Western Interior of North America, from Saskatchewan to southern Texas. Torosaurus possessed one of the largest skulls of any known land animal. The frilled skull reached up to 2.77 metres (9.1 ft) in length. From head to tail, Torosaurus is thought to have measured about 7.6 to 9 m (24.9 to 29.5 ft) long and weighed four to six tonnes. Torosaurus is distinguished from the contemporary Triceratops by an elongate frill with large openings (fenestrae), long squamosal bones of the frill with a trough on their upper surface, and the presence of five or more pairs of hornlets (epoccipitals) on the back of the frill. Torosaurus also lacked the long nose horn seen in Triceratops prorsus, and instead resembled the earlier and more basal Triceratops horridus in having a short nose horn. Three species have been named, Torosaurus latus, T. gladius, and T. utahensis. However, T. gladius is no longer considered a valid species. 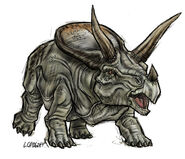 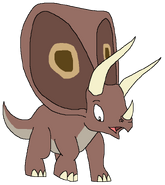 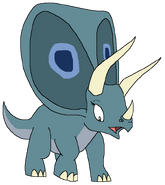 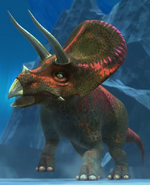 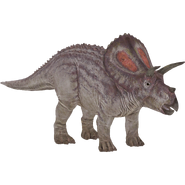